Torpo stake church was built around 1160, and dedicated to St. Margaret. It is the legend of her martyrdom that adorns the canopy with the famous paintings from the second half of the 13th century. The church was built in the Borgund style with raised center room in ships. In 1880 the choir was demolished. The rest of the church was also to be demolished, but the Fortress Memorial Association bought the ship so that it was preserved. The paintings represent some of the most valuable medieval art in Norway. A new church in New Gothic was erected close to the old one in 1880; in the 1970s, large parts of the torn chancel were found under the floor of the new church.

The general Stave church density in the region makes it quite affordable to see some six-seven stave churches during a day trip from Hallingdal Feriepark, depending on how much time you want to spend at each one.

Stunden
Open daily from 9am to 6pm. Possibility of guided tour. NB! Hallingdal Holiday Park cannot guarantee that these opening hours for everyone are correct. Check with local contacts / website to be sure.
Links
https://www.visitnorway.no/reisemal/ostlandet/hallingdal/listings-hallingdal/torpo-stavkyrkje-%C3%85l-i-hallingdal/18539/ 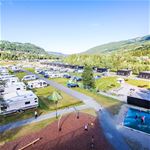